More serious knowledge of the function of living organisms and their organs is impossible without knowing the structure of the cell. The cell is the basic structural and functional unit of genetic multicellular organism. The application of modern electronic equipment it was possible to precisely define the structure of the cell and its role in metabolic and physiological processes.

For all organisms is a unique scheme structure and functional organization of the cells.

The structure of the cell was discovered 60 of 104 chemical elements in the periodic table of elements Mendeleyev. This is an obvious proof of the connection and unity of the living and the so-called. inanimate nature.

The living cell is composed of large and complex molecules of proteins, nucleic acids, fats, carbohydrates, salt and water. These substances in the cell are distributed chaotically, but form orderly and complex structure – the cytoplasm and nucleus.

The cytoplasm is a semi viscous substances grained and it is the core. 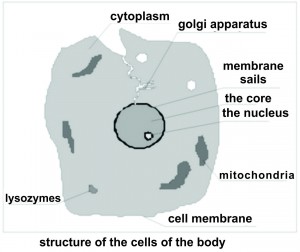 The core is a mandatory part of every cell capable of sharing. Is separated from the cytoplasm by a membrane which is composed of outer and inner membrane of the sail. The membrane contains a pore diameter cores from (0.01 to 0:03) microns (micrometers). Passing through the pores of the nuclide molecules, proteins and amino acids which achieves active exchange between the cytoplasm and the nucleus.

The interior of the sails filled with juice kernel which includes the nucleus and chromosomes in a round shape. Particular importance is given to the chromosomes, since they “locked” hereditary information submitted in cells heritage from generation to generation.

Between the outer surface of a cell to its cytoplasm is idle there is a potential difference of 70 to 90 mV, wherein the positively charged cell surface as compared to the cytoplasm. This potential difference is called the resting potential or membrane potential. The origin of the rest potential explains the so-called. membrane – ion theory. In accordance with this theory, all cells have membrane-covered unequal permeability for different ions. In standby mode, the higher the permeability to potassium ions than for sodium ions.

When irritation increases the permeability of the cell membrane to sodium ions. In idle cell membrane is very little permeable to sodium ion. Irritation changing the permeability of the membrane and the “spate” of positive sodium ions from the environment into the cell cytoplasm significantly exceeds “a flood” of potassium ions moving from the cell to the outside. The result of this exchange is the change in membrane potential (depolarization phase) when the inner surface of the membrane becomes positively charged and the outer as a result of the loss of positive sodium ions becomes negatively charged (Tenforde and Kaune, 1987).

Healthy cells have the potential of about 70-90 mV. Sick and dying cells is less than 30 mV.

Through pulsed electromagnetic energy or electromagnetic field of appropriate intensity and frequency manage to potential diseased cells up to the level that it can function normally and communicate with neighboring cells and with centrralnim system of sending and receiving information. With this device to achieve bone fractures. It accelerating the healing of the normalization of the required functions. 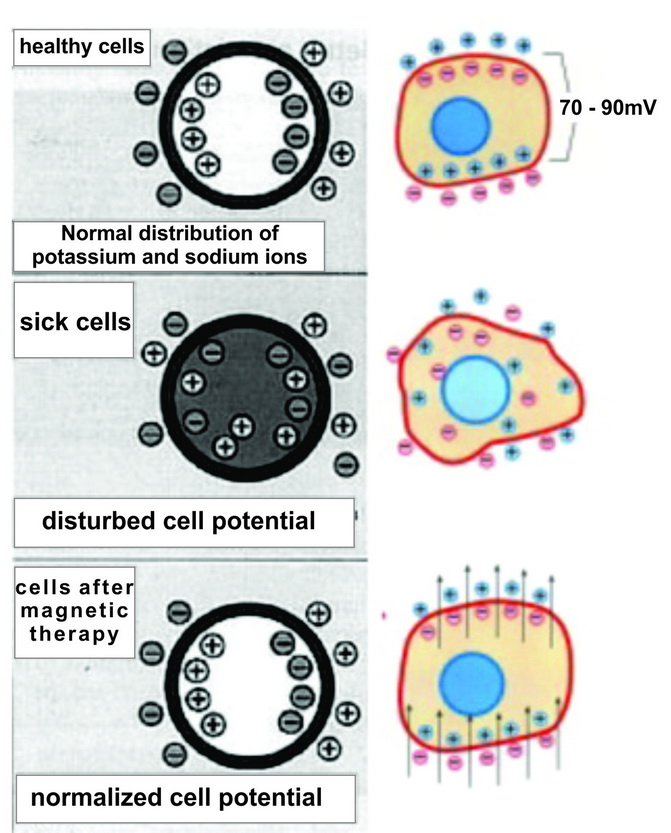 The phenomenon detected electrical potentials of living organisms has opened many studies that focus on the inner EM fields. At the level of tissues and organs, known electrical activity shows macroscopic information as medically useful.

All methods are based on detecting internal EM fields produced in the central nervous system and heart muscle.

Taking into account the observations of these two systems, went a step further. BEM Current research shows that weak EM field, associated with neural activity in other tissues and organs, may also carry the diagnostic value.

New technologies have enabled the construction of extremely sensitive EM devices (magnetometers and electrometers), which is large enought to enable this line of research possible.

The influence of the energy of the magnetic field on the human body, as measured by gas visualization research, methods Rasrjad (tested Kwang Tech II, Korea). 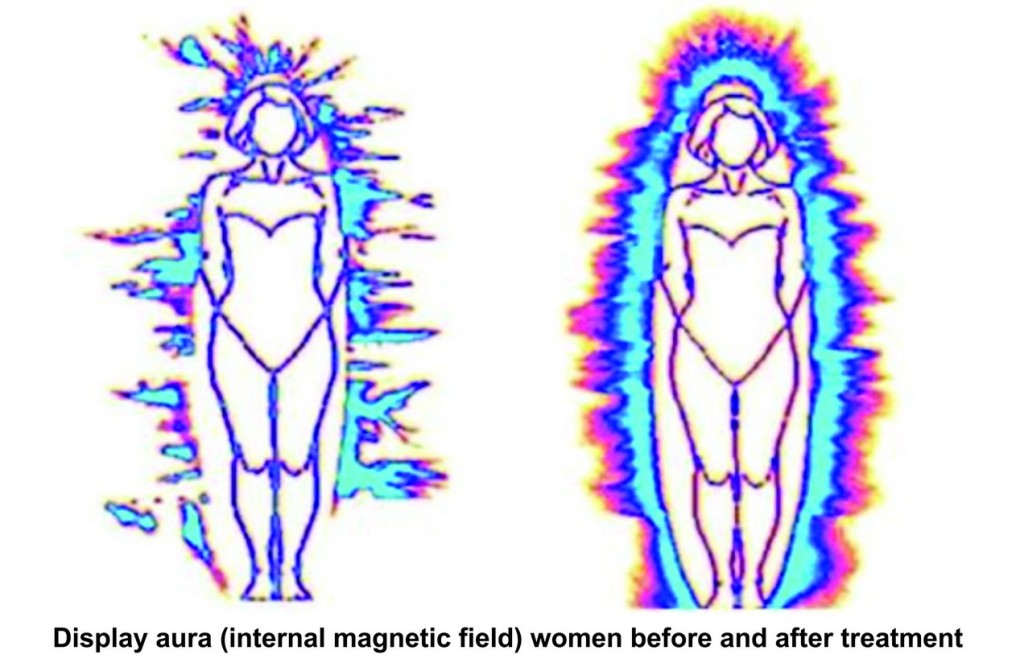 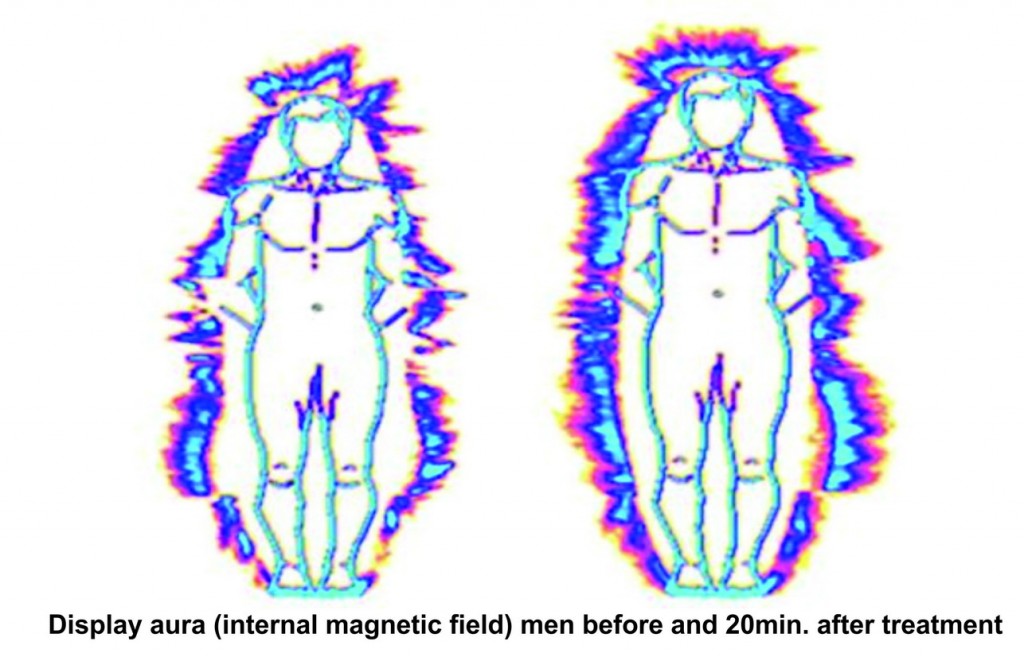 Suppose that we have a sufficient number of oscillators, capable of radiating waves of the same frequency. The living cell is the totality of elementary oscillators – electrons that enter into the composition of protein molecules, or nucleic acids. Drawing chemical energy it within a certain time achieves specific “pumping” of molecules, raising their electrons in the atoms to a higher energy level to then due to some external cause, the electrons have been “ousted” from that level. In this radiation occurs, ie. in such cases, the cells become small projectors that emit electromagnetic radiation in the form of pulses, as the weather is “overthrow” of electrons, compared with the time “pumping”, very briefly.

How is this process in the body steady, cell again electrify and creates a new impulse, whereby the radiation now be directed a little different because it is during the “pumping” she slightly changed its shape, and also changed the layout of protein molecules. Accordingly, the biofield cells represents accident resulting pulses of electromagnetic radiation which, to some degree, restore the structure of living tissue. In other words, the living cell can be considered a kind of biological laser. The described mechanism operates spontaneously: electrons are “upgrading” and “overthrow” the chaotic flow due to intracellular physico-chemical processes. In this case, the total radiation is not brought into phase, and then it is a “plain” Biofield.

What is going on “at the level of cell sets”

It is completely unlikely that the possible cause cellular radiation in phase. Then they will focus their oscillation at a point in space. In the case of electromagnetic oscillations, external cause that will “throw off” electrons with higher levels of the electromagnetic wave. It must be said that not every electromagnetic wave is able to “overthrow” the electrons to a higher level. Such overthrowing it can only in a certain frequency. In the living cell there is some mechanism that “raises” a sufficiently large number of electrons to a higher energy level, and the role of the mechanism for simultaneous “overthrow” has an electromagnetic wave of a certain frequency. Sam spiral structure of proteins in some way determined by the interaction of electrons that are found in various parts of this spiral, forcing them to simultaneously “raise” or “down” to lower levels.

Elektroencelofalogramom be measured to “live” field, and then we measure only the mean value of measured values.

The cell of about 100 microns (micrometers) contains approximately 10 e15 radiating oscillators. If we assume the possibility of “raising” of all these electrons to a higher level, then it will be at their joint “overthrow” gain significant power pulse of radiation. This radiation takes place in the infrared frequency range, very close to the visible light spectrum approximately (1 – 1.2) um (average human eye perceives to 0.8μm). This invisible radiation, when brought to the stage, can meet a lot of strong biological effects and that in either direction.

So, if your biofield act on the cell of another man, and yet at the same time add some energy, it in turn will also begin to radiate. The cells of your body can be perceived to radiation and in some ways it has been transferred to the central nervous system. Hence, the possibility of a clear diagnosis by hand, which is practiced – healers. (Victor Glushkov, academician).

It is possible that the effects (both beneficial and harmful) external magnetic field, can alternatively be replaced in the inner field.

Energy photones in the process, including its emission, as well as other internal fields of the body can prove that they are energy therapies useful health.