As the stars and the planets which move in their galactic orbits, each atom has a nucleus around which revolve positively charged protons and negatively charged electrons that create a circular magnetic field.

Each atom generates an electromagnetic field, which together with all the other things EM field that his power pervades all nature.

From the time of Planck and Einstein we know that all existing forms of energy forms in space, thus the term bioenergy unequivocally clear:
Bioenergy is part of the cosmic energy that have lived forms. So everything that we classify in living organisms.

The perfect organization of the Cosmos bioenergy has a unique role in the process of identifying the existence of all forms of energy in it.

This process performs a unique form of bioenergy – intellect. 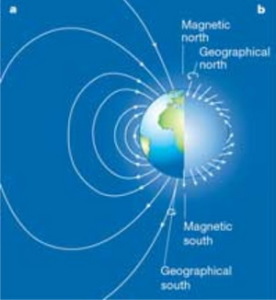 The magnetic field is about magnets or electromagnets in this field can be measured by magnetic force. It is felt when two magnets hold close to one another, so it feels or refusal or attraction. It is measured in Gauss (G) or in tesla (T). Moving away from the magnetic field this force is rapidly decreasing, so the best source of magnetic fields to hold the body. Tesla is a newer unit of measurement for magnetic induction and T 1 is 10,000 G.

Power of the Earth’s magnetic field is about 1/2 Gauss.

Although it looks small, magnetic field strength of a gauss, in proportion to the total mass of the magnet. In connection with these half-gauss in comparison to the size of the country is very large size. In fact it is necessary for all existing life on planet earth.

The significance of this research was observed with the universe around 1960 Astronauts who have resided outside the Earth’s magnetic fields are back with symptoms of psychiatric disorders. After lengthy research, the scientists have discovered the cause of these disorders and solve the problem by installing a magnetic generator in clothing astronauts. This experience has initiated the development of a new science: the magnetic biology.

Companies wishing experiments on biological products outside the Earth’s magnetic field have become the main investors of the space program. Since that time, the overall views of space flight research included a study on the effects of magnetic fields on living organisms during space travel.

In recent years, increased solar activity and the electromagnetic fields created by the man himself, occupying a large part of the spectrum frequencies for the needs of all forms of communication, and changes in the structure of nature (intensified industrialization era) have contributed to man all the more difficult to feel the rhythm of the electromagnetic Earth.

The magnetic field of a man with the same frequency as one of the natural frequencies of the Earth.

Geomagnetic field is necessary to man, because all processes in living organisms during evolution, developed in his presence. It’s a little easier to understand ancient medicine of some people.

health is the balance of positive and negative forces described in TCM as Yin and Yang, in Indian medicine as Shiva and Shakti, in western physiology as sympathetic and parasympathetic.

It is also possible to orient their positive electromagnetic energy to treat ourselves and others (cell potential – Biofield Analysis of the mechanisms of the organization).

This “technique” are not all able to be used in the world is often contested by conservatives, the official medical circles (the truth it should be said that there are a lot of fake healers – cheaters), and is known as alternative medicine.

Modern medicine depends on highly technical procedures such as ECG, EEG, EMG, and they recorded the electrical activity of the heart, brain and skeletal muscle. That there is no electromagnetic energy in the body such tests would not be possible.

From the point of view of health BEM is defined every cell in the body, which has its own frequency of oscillation. The disease presents with other disorders of oscillation. By definition of the World Health Organization health is not merely the absence of disease, but health seems complete physical, mental and material well-being.

Health means a balanced coexistence ourselves with everything that surrounds us. If only the privilege of an individual’s health, then health is certainly not something that can boast of every individual. Therapeutic applications at the lowest level are based on restoring cells to normal vibrations. The effect of the magnetic field is observed everywhere in the world, but in Japan the most widely used in medicine.

Magnetic energy is nothing left untreated. It puts the balance of power in the body, metabolized and polarity, thus giving bioliškom system a chance to heal itself with adequate nutrition.